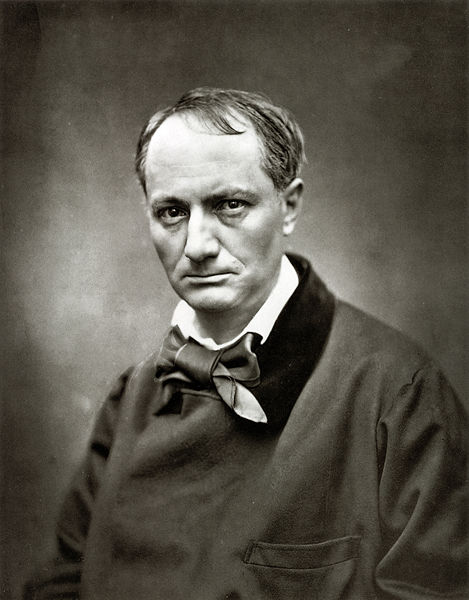 Charles Baudelaire (or "Chuck" as we call him around here)  is known  throughout the  world as one of the greatest  French poets of the 19th  century. He was radical,  brilliant,  and obsessed with all things  sensual; so much so that, with  other poetic  friends, neighbors, and  hangers-on, he formed  the literary group known as "The  Decadents"  (and proud of  it.). Folks like to say that he led a cynical and despairing  lifestyle, but he could sure write a poem.

"There are as many kinds of beauty as there are habitual  ways of seeking  happiness." -Charles Baudelaire.

His best known collection of poems, Les Fleur du Mal or The  Flowers of Evil was published in 1857, followed by a second edition in 1861.  He died in his mid 40's from the  complications of a stroke.  He left his  mark.  For a fuller version of his life,  see our blog post, Who Was Baudelaire Anyway?

The Bad, Beautiful, and Bawdy Baudelaire

“Extract the eternal from the ephemeral.” ― Charles Baudelaire

Charles Baudelaire is now recognized as one of the 19th century’s most daring and accomplished writers, as well as a perceptive art critic and translator. But along with his avant-garde literary style, his eccentric manners, passionate love for drugs and alcohol, and his obsession with melancholia have all gone down in the books, too.

So how on Earth did we land on his name for our company? Well, back in the day, when Baudelaire, Inc. was just a glimmer, our two founders, Joe and Dave, were trying to come up with a title for their new enterprise. Dave had been submitting endless lists of clever names, only to have Joe object to every single one. So, while driving around the local rotary, Dave tried shouting “Baudelaire!”

“Well, it doesn’t actually translate, but it sort of sounds like ‘beautiful air.’”

“That could work! Where did you get the idea?”

“Oh,” Dave said (innocently)—“It’s the name of a French poet. And, actually, he wrote a lot about fragrance.”

“Well, that sounds perfect. Let’s give it a try,” Joe said blindly.

It wasn’t until the company’s first trade show that some of the less-than-noble facts about Monsieur Baudelaire started to become clear to Joe, and by then, “The rest was history!” Unfamiliar with the decadent, desperate, and dedicated Baudelaire? Here are 10 remarkable facts about the bold poet who became our namesake.

Before he could complete his baccalaureate degree, Baudelaire was expelled from school at the Lycée Louis le Grand. Luckily, he did manage to finish his degree within the year; he must have come to some arrangement with the institution. Had he not, it could certainly have altered the social and intellectual circles he was able to move in later on.

Life on the High Seas

Okay, the subtitle may be a little misleading. Although Baudelaire definitely intended to take an epic voyage to India at the age of 20, the whole thing came to an abrupt close when a storm damaged the ship on which he was traveling. He made it no further than an island near Madagascar; however, he made the most of his brief experience in exotic lands and on the sea. Both were deeply imprinted on him and influenced his writing.

At 21, Baudelaire inherited a fortune from his father, who had passed away when he was only six years old. Within two years of receiving the money, Baudelaire’s remaining family became aware of the fact that he had blown through nearly half of it! Believing the money was being mishandled, his family decided to enlist a board of guardians to oversee the remaining funds. The arrangement forever plagued Baudelaire, since he was a man of, shall we say, lavish tastes. But his discontent did pay off in the form of some truly inspired poetry.

There were two women who played the most prominent roles in Baudelaire’s life. One was his mother, to whom he grew very close after his father passed away. (Interesting side note: His father was 60 and his mother just 20 when they wed.) Baudelaire’s mother remarried to a military man, a decision that Baudelaire never completely forgave.

The other lead female in his life was Jeanne Duval, a woman with whom he had a long romance. She was a “mulatto” actress, who he referred to in writing as his “Black Venus.” The two had a tumultuous relationship, and Baudelaire had several other lovers, but none are considered as significant in his life as the Black Venus.

Due to his obsession with beauty (a quality he spent decades furiously studying), Baudelaire was heavily involved in the art world. He was an enthusiastic collector, though it was never lucrative for him, and well-known for his work as a knowledgeable critic. In particular, he heavily influenced the work of Rodin, specifically, his famous sculpture, “The Gates of Hell.”

Just one month after the publication of Les Fleurs du Mal (Flowers of Evil or Flowers of Suffering), which is considered Baudelaire’s greatest work, the poet was charged with offenses against religion and public decency. Thirteen of the poems were put on trial, and in the end, he was required to cut six of them from the collection altogether. He was also forced to pay a fine of 300 francs.

Not surprisingly, Baudelaire was a big fan of Edgar Allen Poe. The two are often compared for their dark, gothic approach to writing and their skillful use of symbolism. But what many don’t know is that Baudelaire actually did several remarkable translations of Poe’s work that are considered extremely high caliber by scholars.

A Penchant for Partying

Another thing Baudelaire might have admired about Poe was his fondness for imbibing. Even in his writing, Baudelaire frequently encouraged others to partake in drugs and alcohol, especially wine, as well as poetry, virtue, and anything else that he identified as a relief from mortal suffering. Opium and hashish were two of his favorites, but he was clearly willing to try just about anything. He consumed his hash as a green jam instead of smoking it.

Known for eccentric antics, such as casually inviting others to bathe with him or to come see some strange oddity in his room, Baudelaire’s legend has become difficult to extract from the reality. Experts are still unclear about how many encounters recalled by those who knew him actually occurred, but they agree the overall quirky and audacious portrait of the man is accurate.

Baudelaire only lived to be 46 and ultimately died of syphilis, for which there was no treatment or cure at the time. The disease played out in a frightening and ugly string of events that led to his passing. This including becoming aphasic and unable to effectively communicate in the final months of his life; a fate that nearly drove him mad. His mother was with him when he passed, and he was buried in a family vault in Montparnasse Cemetery.