Who Was Baudelaire Anyway? 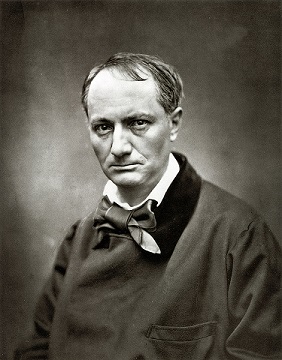 Charles Baudelaire (or “Chuck” as we call him around here) is known throughout the world as one of the greatest French poets of the 19th century. He was radical, brilliant, and obsessed with all things sensual; so much so that, with other poetic friends, neighbors, and hangers-on, he formed the literary group known as “The Decadents” (and proud of it). Folks like to say that he led a cynical and despairing lifestyle, but he could sure write a poem.

Chuck was intrigued and fascinated by both Wagner’s music and the work of Edgar Allen Poe. Dealing with what appeared to him as the timeless conflict between the ideal and the sensual, he represents romanticism at its most extreme – the eternal despair of yearning.

When his best known collection of poems, Les Fleurs du Mal or The Flowers of Evil, was first published, Baudelaire, the publisher, and the printer were all prosecuted and fined for presenting obscene and blasphemous work. What more of a tribute (or a marketing tactic) could you ask for?

Charles was born to Joseph-Francois Baudelaire and Caroline Archimbaut Dufays. His father died when he was six years old, leaving his mother alone. She then made the “mistake” of marrying a man Charles disliked, so he started acting up as soon as he got the chance. Expelled from the lycée, he enrolled in law school, but never finished. He did, however, become addicted to opium and contracted syphyilis when at law school, so the time wasn’t totally wasted. After all, while both proved to be, ultimately, fatal, they were also de rigeur for his new career as a writer.

In 1845 he attempted suicide, although nowadays we’d say he was just trying to get attention. His finances, however, were certainly in shambles; he was heavily in debt; and his health was nothing to brag about.

In 1857, the first volume of Les Fleurs du Mal was published. The ensuing fiasco with the law while, as we pointed out, ultimately very good for sales, was extremely disappointing to Baudelaire. Coupled with the death of his stepfather, he became more and more depressed. Finally in 1859 he left Paris and joined his mother in Honfleur.

extremely disappointing to Baudelaire. Coupled with the death of his stepfather, he became more and more depressed. Finally in 1859 he left Paris and joined his mother in Honfleur.

New disappointments were to come: refusal of entry into the French Academy, more financial problems, and personal problems with his mistress(es). Not long after this he started to have headaches and nightmares. Failing health and these devastating events led him to the brink of madness.

He left Paris and moved to Brussels, where he met more disappointment. His health worsened. He suffered a stroke of apoplexy. Partially paralyzed, he spent some time in a Catholic nursing home before returning to Paris, where on August 31,1867, he died in his Mother’s arms at the age of forty six.

You can visit his grave in the Cimetiere de Montparnasse, Paris, France. (We did.) 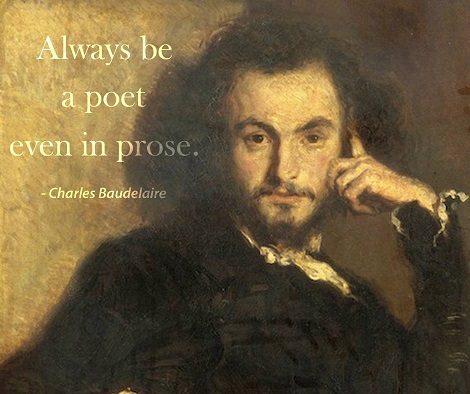